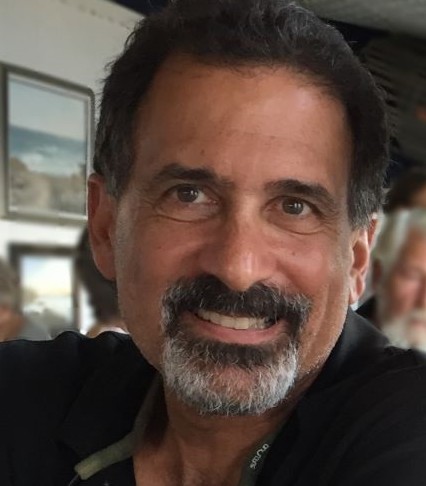 Stephen Victor Platamone, retired naval officer, accomplished musician, life-long surfer, husband, father, brother, died on November 16, 2019 at his home in Williamsburg, VA.  He was 63 years old.  Steve grew up in Temple City, CA, and graduated from Bishop Amat Memorial High School in 1974, where he was a star wrestler.  He was a tremendous athlete throughout his life, later participating in marathons and surfing with his high school friends whenever he traveled to the west coast.  Steve attended Palomar College and California State University-Los Angeles where, when he wasn’t touring as the keyboardist of a rock band, he studied Music and Sociology, graduating in 1979.

After college, Steve struck out to seek new experiences in New York as a flight attendant / instructor for New York Air. It was there that two events took place that would guide the course of the rest of his life.  He met his future wife Wendall (Wendy) Ann Baer of Canfield, OH and he began to formulate a plan that would challenge him in ways he had never experienced, and that would ultimately satisfy his drive for excellence in everything he did.  In 1983, Steve entered Aviation Officer Candidate School at Naval Air Station Pensacola, FL. Upon graduation in the fall, he was commissioned as an Ensign in the United States Navy Reserve. Steve went on to earn his wife and his Wings in 1984.

Steve’s military career took him from Hawaii in 1985 to Norfolk, VA with many stops in between. During this time, he earned an Executive MBA from Saint Joseph’s University in Philadelphia. In 2005, after being promoted to Captain, he reported to Naval Air Station Norfolk. He was the driving force behind the Naval Aviation Enterprise Initiative, implementing a comprehensive program to make fundamental process changes in the way the Navy provides manpower, equipment, and training to sustain near and long-term readiness goals.  In 2008, Steve retired after 25 years of distinguished service, earning the Legion of Merit, four Meritorious Service Medals and numerous other personal and unit awards.

After his Navy retirement, Steve joined Booz Allen Hamilton in Norfolk, VA where he served as the Readiness Expert Advisor for the Navy.  Steve was a leader, mentor, and friend with broad reach and influence across the Booz Allen organization and his government clients.  He was also a plankowner in the standup of the Navy Information Forces, Suffolk, VA.  His influence and contributions were vital to the successes during his time there and will be felt for years to come.

Steve was a Christian Bible Study leader for his friends and neighbors in Williamsburg, VA.  He diligently studied God’s Word and lived as an example to his family and friends.  He enjoyed woodworking in his spare time and was a regular at the local gym.  He is survived by his loving wife Wendy of 35 years, daughter Alexandra (Alle) of Longmont, CO, son Nicolas (Nick) of Newport News, VA, sister Sandra of San Clemente, CA, and brother Christopher of Palm Desert, CA.  He will be dearly missed.

James 1:12 – Blessed is the man who remains steadfast under trial, for when he has stood the test he will receive the crown of life, which God has promised to those who love Him.

Celebration of Life will be conducted at 1 p.m. Friday, December 6, 2019 at Olde Yorke Chapel, 1 US Coast Guard Training Center, Yorktown, VA 23690. A reception will follow at the Port of York reception hall. If you wish to attend the Celebration of Life, please register at https://www.surveymonkey.com/r/3VWJS67. Information must match I.D. shown as this is a military installation.

To leave a condolence, you can first sign into Facebook or fill out the below form with your name and email. [fbl_login_button redirect="https://www.vacremationsociety.com/obituary/stephen-victor-platamone/?modal=light-candle" hide_if_logged="" size="medium" type="login_with" show_face="true"]
×