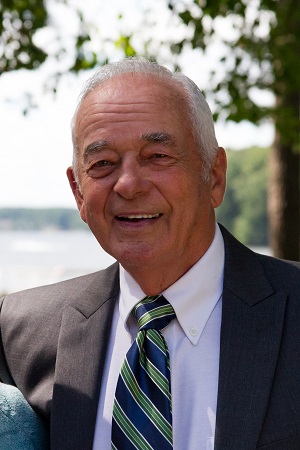 On Saturday, May 15, 2021, Robert McDonald “Mac” Surry, 91, a true gentleman, passed away at home after a period of declining health.  Born on December 22, 1929 in Enfield, North Carolina to William R. and Edna C. Surry, he was five when they moved to Newport News where he lived most of his life.  It was there he met and married his sweetheart and wife of 69 years, Peggy Ann Appleton.

Mac began his career as a Virginia State Trooper in the Richmond area but after several years found the commute too much for his family.  He began working for the C & O Railway and was ultimately employed with Newport News Shipbuilding and Dry Dock Company, retiring as a member of the Newport News Shipyard’s Quality Inspection Department.

Mac’s love of adventure and the natural world led him to become an Eagle Scout and later a Boy Scout leader. He forged long lasting friendships with many of those young men and assistant scout masters who continued to keep up with him over the years.  Mac had a love of all things automotive: cars, motorcycles, and trucks.  But boats and planes did not escape his interest.  While he could name every car on the road and tell you what year it was made, he also harbored the dream of one day owning a plane.  He often said, “He wanted a plane some kind of bad”.  It was not to be as Peggy won out on that one thing.  There were many motorcycle stories from his younger days and later in his life he purchased a Honda Gold Wing which allowed him to continue his motorcycle adventures with his friends from Lake Gaston.  He also owned a truck or two and a few boats during his lifetime.

Mac’s four children passionately shared his enjoyment of adventure, the outdoors and nature.  Peggy was the beneficiary of their journeys as a family.  Love of family defined him as a person. They frequently camped in the mountains and traveled around the East Coast, first in a tent and then in a Holiday Rambler travel trailer…. a treat which they all loved and continue to hold as fond memories.

After their four children, one of Mac and Peggy’s greatest joys came in 1969 when they purchased property on Lake Gaston in North Carolina.  At the lake, there was boating, skiing, swimming, fun times, all while making great new friendships.  After Mac’s retirement, they moved to Lake Gaston where he became a member of the Roanoke Wildwood Volunteer Fire Department and, in 2004, he and Peggy joined Pleasant Hill Christian Church.  One thing is for certain, his children and grandchildren will always remember him for his ever-present sweet smile and his jolly laughter.  He lived a life worthy of celebration or as D.H. Lawrence shared “Life is ours to be spent not to be saved.”

In lieu of flowers, donations may be made to Pleasant Hill Christian Church, P.O. Box 550, Gasburg, VA 23857 or the Alzheimer’s Association.

The Cremation Society of Virginia-Newport News is in charge of arrangements.

To leave a condolence, you can first sign into Facebook or fill out the below form with your name and email. [fbl_login_button redirect="https://www.vacremationsociety.com/obituary/robert-mcdonald-surry/?modal=light-candle" hide_if_logged="" size="medium" type="login_with" show_face="true"]
×