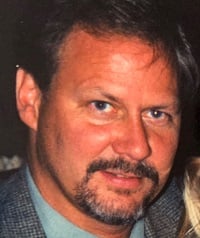 Jonathan Adrian Hoebeke, of Newport News, died in his home on February 27th, 2021.

Jonathan (Jon) was born on August 28, 1961, in Lansing, MI, to Gary L. Hoebeke, a second-generation army officer, and Susan Jean Hyde, from Northern, Virginia. As a child, Jon’s family moved across many parts of the United States and lived in many countries, including England, the Mediterranean, Mexico, Germany and Panama. In 1979, he graduated Pacelli High School in Columbus, Georgia. He subsequently completed his freshman year of college at Michigan State, and graduated from Old Dominion University in Norfolk, Va., with a bachelor’s degree in history.

Jon took up a career that blended sales and technology. He was successful in getting many developers in the Hampton Roads area to cut costs and make better estimates using software tailored for the construction industry. Jon welcomed his daughter, Alexandra (Allie) to the world in 1999 and his son, Corey in 2002.

Jon loved sports. He played basketball, baseball and football in high school, and coached little league as an adult. Although he suffered from depression, he is remembered by friends and family as being quick-witted and extremely funny. In addition to his children, Jon is survived by his step-daughter Katie; his brother, Chris; his half-siblings Piet, Kristin and Holly; his father, Gary and his loving, extended family.

A memorial will be held at a later date.

To leave a condolence, you can first sign into Facebook or fill out the below form with your name and email. [fbl_login_button redirect="https://www.vacremationsociety.com/obituary/jonathan-adrian-hoebeke/?modal=light-candle" hide_if_logged="" size="medium" type="login_with" show_face="true"]
×