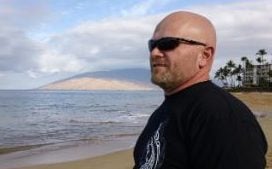 Don claimed Virginia Beach as ‘his city’ where he grew up and lived most of his life.  He enjoyed walking the oceanfront boardwalk on early weekend mornings, attending the NAS Oceana Air Shows, Chincoteague Pony Swim, and checking out new local businesses and restaurants.

Don worked in the Insurance field and was a great mentor to many co-workers and staff to help develop or perfect call scripts, training modules, and help new agents sharpen their communication skills with customers.  He took pride in his ability to relate to and assist customers.

He served in the 3rd Armored Cavalry Regiment out of Fort Bliss, TX, including service in Germany.

Anyone who knew Don knew he was a die-hard, superstitious New England Sports Fan relishing in many championships between the Red Sox, Bruins and Patriots.  He was also an avid PWF (Pacific Whale Foundation) follower and contributor, with his love of Humpback Whales.  He enjoyed snorkeling and seeing the marine life in their natural habitat.  He had vacationed in Hawaii and Maui a few times soaking in the beauty of the verdant islands against the cerulean blue skies.  He often reminisced of living on Kwajalein as a young child and wished to be able to visit again.

In lieu of flowers, donations may be made in his memory to Pacific Whale Foundation, American Heart Association, or a charity organization of your choice.

To leave a condolence, you can first sign into Facebook or fill out the below form with your name and email. [fbl_login_button redirect="https://www.vacremationsociety.com/obituary/d-griffin-outlaw/?modal=light-candle" hide_if_logged="" size="medium" type="login_with" show_face="true"]
×