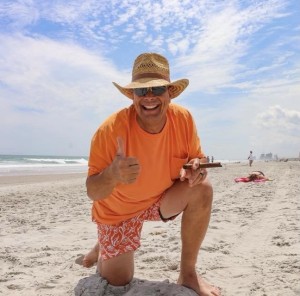 On Monday, March 8, 2021 Anthony “Jerry” Pescetto, loving husband, father, grandfather and friend passed away suddenly at the age of 64.

Jerry was born on November 13, 1956 in Baltimore, MD to James Louis and Joyce (Long) Pescetto. He was a Master Craftsman for more than 44 years with his own Home Improvement Business that he started with his son Josh. His son Justin also worked with them on occasion gaining valuable skills.

On May 31, 1980 he married Wilma Morrell. They raised two wonderful sons who they are very proud of. Jerry had a passion for anything carpentry/construction and loved sharing his work, ideas and opinions. He loved GOD and his family deeply. He enjoyed his friends tremendously and loved talking to anyone. It was often said “Jerry has never met a stranger”. In the Court where he lived he was even dubbed “The Mayor”. Nascar was a favorite pastime. He loved being semi-retired at the Beach. He was known for his “booming voice”, ease of gab, smile that would light up a room (his wife always said she picked him out in a crowd for his radiant, dimpled smile), and his willingness to help anyone. Jerry loved life and lived it fully.

Jerry is preceded in death by his father James Louis and his mother Joyce Pescetto, as well as his brothers Jamie Pescetto and Giovanni Pescetto. He is survived by his wife Wilma, his son Josh and his wife Erin and their daughter (his precious granddaughter) Lyra, His son Justin and his wife Brittany, his sisters, Jeanne and her husband Chuck Smith, Joanna and her husband Fred Reitz, his brothers Jeffrey and his wife Julie and Joey and his husband Mark White and many nieces and nephews.

A Memorial Service is being planned for a later date in Maryland.

To leave a condolence, you can first sign into Facebook or fill out the below form with your name and email. [fbl_login_button redirect="https://www.vacremationsociety.com/obituary/anthony-pescetto/?modal=light-candle" hide_if_logged="" size="medium" type="login_with" show_face="true"]
×